Actors Lab Studio began twenty years ago in Sydney when Peter Feeney began running scene groups; a place where actors could work out with their peers and keep acting fit. Since then Peter has taught in Brisbane, Sydney, Toi Whakaari (Wellington), The Actors Program (Auckland), and in his own Studio in Auckland. Over that time, which has run parallel with Peter’s own professional career, Actors Lab has evolved in to its present form: a safe fun space where Peter and guest tutors (actors, coaches, industry professionals and directors, all at the top of their game) share their practical and hard-won wisdom. It’s the incredible teachers that make The Actors Lab Studio what it is, alongside the brilliant work of our Producer, Emma Campbell.

This evolution, and the new screen emphasis, is a response to what young actors are asking for – and need. Actor lead groups are taking us back to the way things used to be when, like the circus, people were either born into the acting profession or ran away from home into it. There were no drama schools. People learnt, sponge-like, from more experienced actors. Employment opportunities are now global and the ability to create content readily at hand. 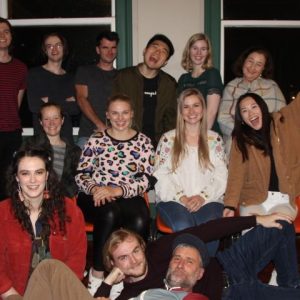 When you join us we’ll get you used to working under pressure and out of your comfort zone. You’ll get free and relaxed in your acting, bringing more of your personality to bear, and get used to living in your instincts. We’ll pass on great ideas on how to prepare to perform, and develop a character. Peter’s book, ‘Acting and how to Survive it,’ will underpin your learning, and help make sense of your experiences in class. Our working environment is challenging, but safe, giving you permission to fail. You’ll work with the same group of actors term by term, growing and bonding together. You’ll learn heaps, and you’ll laugh more than you ever have in a class.

Our aim as teachers in Actors Lab is to build your confidence and artistry. Each visiting teacher brings their unique perspective, experience and wisdom to the work. There’s no overall system or technique you have to master: we are about what works for you, and helping you figure that out. You get to influence the tutors we choose and the work we cover. We’re screen focused but know that subjects such as voice, accent and improv come in to play with that priority too.

Teaching is via the Socratic method where the tutor du jour asks the questions but does not give the answers. As they will have to on the job, the actor must struggle to figure it out on their own. This makes for hard learning that sticks.