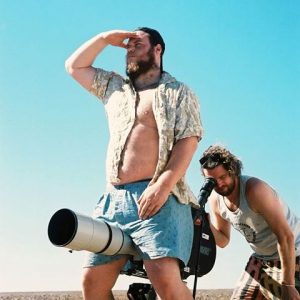 THUNDERLIPS are genre chameleons; they’ve made music videos in the style of a 90’s sitcom, an online teenage love story using only GIFS, a hippie samurai girl 70s cop show, a hipster tone piece, LBTQ cinema verite, a 2000s white rap hip hop video, an 80s teen horror, and an animated computer nightmare; all whilst using every capture medium you can shake a stick at from 35mm to Hi-8 video, and often making use of practical in-camera effects. They’ve made music videos that have made people LOL, become aroused, feel acutely uncomfortable and say ‘Holy shit is that the sun?!’.

THUNDERLIPS’ commercials for Lotto, Samsung, Speights, Meridian Energy, 2Degrees, Head & Shoulders, and many others also show-off their narrative story-telling prowess and comedic flair. Check them out below, and/or here.

THUNDERLIPS have made two short films to date; I Think We Might Have to Do Something made it to the Grand Finals of the 48 Hour Film-making Competition in 2013, and Lord Echo – Molten Lava (a minimalist dialogue-less art film about a girl at sea…posing as a music video) can be watched below. Four of Jordan’s early short films (pre-THUNDERLIPS) will be available to view here soon too.

THUNDERLIPS think of storytellers as modern Shaman – making sense of the nightmare realities of existence. Probing the meaning of life, healing the soul. That’s what they aspire toward in their work. They like to work socially, with lots of talking, laughing, food, and arguments. Jordan also likes to hide away on his own, smoking weed, and banging his head against the blank page until the blood and sweat looks like a page of screenplay.

Sean’s favorite filmmakers are Scorsese, Coppola, Kubrick, Spielberg, and Kurosawa. And a few of his favorite films in no particular order are The Graduate, Apocalypse Now, Taxi Driver, Seven Samurai, and Purple Rain.