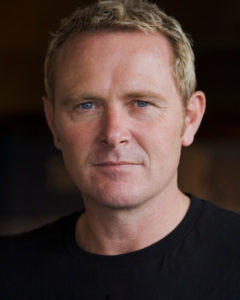 Lovatt began his long theatre career in the late 80s, after graduating from Toi Whakaari. Since then he has won acclaim for his “intense, standout” work in The Only Child (Silo Theatre, 2011), not to mention awards for Tom Stoppard classic Arcadia (Circa, 1995) and “near-brilliant” epic When the Rain Stops Falling (Silo Theatre, 2010).

By the early 90s Lovatt had begun acting for television. Thanks to director David Copeland, he made his screen debut in police show Shark in the Park. He went on to appear in mini-series Typhon’s People, did 30 episodes of Shortland Street, and almost as many of Mysterious Island, playing one of Jules Verne’s adventurers. After dying more than once on the Xena/Hercules stable of shows, Lovatt was invited back for a larger Xena role, as Hades, lord of the dead. He also played righthand man to Hercules star Michael Hurst on 1997 teleplay Highwater.

By now Lovatt was concentrating increasingly on screen work, and making his first ventures across the Tasman — ventures that would pay off when in 2001 he won a part in acclaimed series Something in the Air, then long-running soap Neighbours. His role on Ramsey Street as former oil rigger, family man and bar owner Max Hoyland would keep him on screens for five years straight (longer, counting reruns), and inspire 45-paragraph descriptions on Neighboursfansites. Working on extended takes with multiple cameras, reminded him of working in theatre.

On coping with the fame international soap-stardom brought, Lovatt remarked, in a 2006 interview: “other members of our cast who’ve come over have [England] said ‘oh you wont be able to walk down the street, you try walking down Oxford Street!’ [Well] I’ve got no problem, I’ve only been recognised maybe three times in the two days I had in London before I came up here [Edinburgh Festival]. Maybe people do recognise me but its not like I’m that thrilling to see coz I’m just ‘Dad’ on the show!”

In the period before relocating to Australia, Lovatt acted in Being Eve (playing likable Dad to the main character), Duggan and this episode of Mataku. He also had his first starring role on the big screen: in what may have been a strange case of cinematic precognition, 2002’s This is Not a Love Story (aka Beyond Therapy) saw him playing a soap star who tires of playing the same role. Variety praised the core trio of actors, and found the film a “droll sexual comedy”.

Lovatt’s other movies — all Kiwi — include the “mad, epic”, rainsodden shoot of Savage Honeymoon (playing opposite Theresa Healey, as the straightjacketed husband who encounters the Savage family), Show of Hands (as a down-on-his-luck car-yard owner) and conspiracy thriller The Cure. Off-screen, Lovatt has kept his acting skills sharp by taking Bruce Mason’s classic extended monologue The End of the Golden Weather to Edinburgh; and performing it on Mason’s beloved Takapuna beach, each Christmas day.

Lovatt played a well-meaning but untrustable father in Go Girls, and enjoyed getting “more and more out of control as the show went on”. He is proud to have acted (and been award nominated) in movie Fantail, and Oscar Kightley cop show Harry; Lovatt also played a policeman in Jane Campion miniseries Top of the Lake. In Christchurch earthquake drama Hope and Wire he was Jonty, a lawyer for whom the quake exposed weaknesses in both his financial dealings and his marriage.