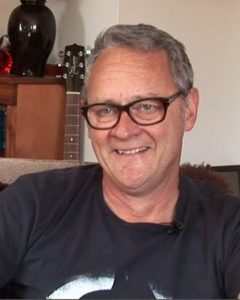 Born and bred in Auckland, Stephen Campbell managed to make his way into television after a number of years in advertising, where he did everything from copywriting to art directing.
In the mid 80s he applied — more than once — to join TVNZ’s producer training scheme. A fortnight after being told he’d finally succeeded, Campbell found himself in a TVNZ staff cafe in Christchurch, surrounded by extras dressed as spacemen and cowboys. “That was when I was completely sold,” he says. “I thought: I’ve arrived. And I’m staying.”
The scheme saw Campbell on attachment for a year to TVNZ’s Children and Young Personʼs department. Here immortal children’s character Thingee enters the story. One of Campbell’s first breaks was directing an After Schoolsegment which saw one of the hosts tell a lighthearted historical tale, alongside illustrations drawn by Campbell. One story was about a ‘plucked duck’; a duck mistaken for dead after the local pond got infected with beer. After School producer Bryan Allpress liked the illustrations so much, he suggested the duck could have the makings a great character elsewhere.

At the end of year Campbell was one of eight out of 40 chosen for two further years of producer training. Allpress then gave him the task of taking the duck images and designing and supervising construction of a new character, Thingee(so named, because no one had thought of a better one). Thanks also to the voice talents of Alan Henderson, co-hosts Thingee and Jason Gunn would win a legion of fans, starting with After School.

In 1989 Campbell headed back to Auckland, to produce five day a week teen show 3:45 LIVE (Campbell alternated directing with John Milligan). The show proved so popular that the first time viewers were invited to ring in and pick their favourite music clip, the Auckland telephone exchange crashed from the strain.

After time on TV3 children’s series Early Bird Show and Yahoo, Campbell freelanced as a writer/director on a variety of sketch comedy series, including Funny Business and That Comedy Show.

He also co-created award-winning magazine show Ice TV. Campbell wrote and directed many of Ice TV’s most popular segments, including ongoing parodies of hospital and cop dramas. “Jon (Bridges), Nathan (Rarere) and Petra (Bagust) were incredibly good on camera,” says Campbell. “They were having a lot of fun and I think it just came across.”

In 2002 he created Greenstone TVʼs ambitious, “gag-heavy” Secret Agent Men. The show revolved around a group of Kiwi teens helping save the world from villains with plans to take over the world. The second season was named best children’s programme at the 2005 Qantas Television Awards, and the show sold to multiple countries.

The longtime superhero fan’s next series was originally pitched as The Fantastic Friends, but the release of Marvel movie Fantastic Four saw it retitled The Amazing Extraordinary Friends. As director and chief writer, Campbell oversaw production through three seasons and two accompanying web series. Although made on a far from heroic budget, the show’s makers didn’t “shy away from galactic androids being chased into the sun.” Another international success, the tale of schoolboy superhero (Carl Dixon) and his grandad (David McPhail) was nominated for awards in Rome and NZ, and picked up another in Korea.

In 2012 he produced The Radio, which saw Jeremy Corbett and Paul Ego playing incompetent radio hosts.

In 2015 Campbell debuted his next show. Science fiction thriller The Cul De Sac centres on a group of teenagers who wake up to find all the adults have mysteriously disappeared. The ambitious, twist-filled dystopia ran for three seasons. Campbell directed all but three episodes.