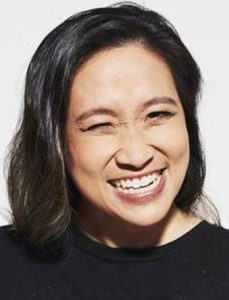 The youngest child of immigrants from Hong Kong, Roseanne Liang was all set to follow her two sisters into medical school. But when the high school dux was encouraged by her siblings to defer for a year to try other things, Liang put aside becoming a doctor to concentrate on filmmaking.

In 2005, Liang released her hour-long documentary Banana in a Nutshell, based on her own romance with a European Kiwi “Banana in a Nutshell was originally a short documentary I devised to distract me from the highly emotional events that I knew I would have to get through.” said Liang. “The camera was something to hide behind.” The title refers to Asians (yellow on the outside) brought up in Western society (white in the inside). Liang continued the story with a 30 minute epilogue for the film’s DVD release.

At Banana in a Nutshell’s premiere, producer John Barnett offered Liang the opportunity to turn her documentary into a narrative feature. Liang has described it as an “‘angels chorus’ moment”. “Most film graduates want the opportunity to make a feature film and it’s a really hard road. But to have someone stride up to you and offer it to you is an incredibly lucky happenstance.” In 2005 Liang was named New Filmmaker of the Year by screen organisation SPADA.

In 2017, Liang signed with an American agent, after directing action short Do No Harm. The bloody action film, which premiered at the 2017 Sundance Film Festival, is about a Chinese surgeon facing off against gangsters just as she’s about to operate. The film was funded by the NZ Film Commission as a proof of concept for an action film Liang was developing. Do No Harm won several awards, including the Audience Award for favourite short at the 2017 NZ International Film Festival and a nomination for Best Short Film at Sundance.

By 2018, the success of Do No Harm and My Wedding and Other Secrets had brought Liang to the attention of the 50 studio executives and producers behind the Alice Initiative, named after pioneering female filmmaker Alice Guy Blaché. They named Liang as one of 20 female directors from around the globe who merited a directing gig with a Hollywood studio.

In late 2018, Liang announced she was set to develop and direct the feature-length version of Do No Harm, produced by husband and wife filmmaking team David Leitch and Kelly McCormick (Deadpool 2, Atomic Blonde).