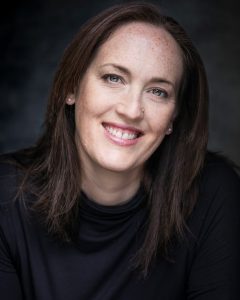 Rita graduated from the UNITEC School of Performing and Screen Arts in 1998, and has since taught at UNITEC, Massey University, Auckland University and The Actors’ Program.

In 2000 she founded the Legacy Theatre Company; directing, producing and/ or performing in outdoor productions of A MIDSUMMER NIGHT’S DREAM (Dir Rita Stone, 2000), MEASURE FOR MEASURE (Dir Richard Rugg, 2001), THE TAMING OF THE SHREW (Dir Jarrod Tuck, 2002), and AS YOU LIKE IT (Dir Tim Faville, 2004), as well as coordinating Theatre in Education schools’ tours around Auckland of abridged Shakespeare scenes.

Rita traveled to London in 2004 and took a course at Shakespeare’s Globe, returning again in 2011 with the Shakespeare Globe Centre NZ (SGCNZ)’s ‘Teachers Go Global’ scheme, where she trained at the Globe Education Centre and performed in MUCH ADO ABOUT NOTHING, directed by Bill Buckhurst, on the Globe stage.

Rita holds a Secondary Teaching qualification in English and Drama and was Assistant HOD of Drama at Western Springs College in 2011. For Western Springs College, Rita has directed A MIDSUMMER NIGHT’S DREAM, OUR TOWN, TWELFTH NIGHT and MOTHER COURAGE AND HER CHILDREN – for which she won Outstanding Play at the 2011 AMI Showdown Awards and was nominated for Best Director. She was the SGCNZ University of Otago’s Sheilah Winn Shakespeare Festival Auckland Central Representative 2010-2011, and in 2013 she directed an all-female production of MEASURE FOR MEASURE at the Titirangi Theatre.

In 2016 Rita directed LUCRECE (“…a visually stunning show”) for the Auckland Shakespeare Company, and for the Pop-up Globe she directed the gender-reversed JULIUS CAESAR (“‪… a plethora of strong performances aided by Stone’s direction and a fresh take on the classic play mean it’s not one to miss.”) in 2018.