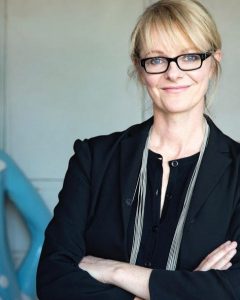 Miranda Harcourt calls herself “a great fan of variety and challenge”. Harcourt has acted on stage, screen and in prison, ventured into directing, spent seven years as Head of Acting at drama school Toi Whakaari, and made a name in the international screen industry for her work as an acting coach.

The daughter of actor Kate Harcourt and broadcaster Peter, she began acting early: at age four, she played a young Katherine Mansfield in a TV documentary. Thanks to a run of radio roles, the child actor was heard far more than seen. At 20, after a small but satisfying part in 1981 film Bad Blood, she auditioned for drama school Toi Whakaari. Although a “terrible student”, she graduated and began a two-year apprenticeship at Dunedin’s Fortune Theatre.

Harcourt left Dunedin for hit television soap Gloss, the show that rocketed her to fame. Over three years her character of Gemma transformed from innocent wannabe journalist to “unbelievably horrible” manipulator. The transformation proved “amazing fun to play”. Although viewers confusing acting and life occasionally spat at her in public, Harcourt is thankful for all the doors that Gloss opened. It also made her realise that acting for stage and television was “like the difference between peeling potatoes and playing the piano; you still use your hands but they’re totally separate skills”. Gloss saw her nominated for Best Actress at the 1989 Listener Film and TV Awards.

The same year she teamed up with Annie Whittle to star in miniseries The Shadow Trader. Whittle and Harcourt played odd couple Auckland café-owners, facing off against a property developer who dreams of wrecking balls.

Harcourt used her TV profile to launch a sellout tour of Oracles and Miracles, a play about two sisters. She and Fiona Samuel played 11-year-olds for part of it. It was the third play Harcourt had toured around New Zealand. The NZ Timesdescribed her work in solo show Kaz – A Working Girl as “almost frightening in its stamina and emotional range”.

In 1990 Harcourt won a grant to spend a year at London’s Central School of Speech and Drama, studying the use of drama and movement in therapy. While in England she worked in psychiatric institutions, and with the deaf and disabled. Harcourt had previously learnt sign language for play Children of a Lesser God, and was a dialogue coach for deaf actor Sonia Pivac on 1989 television series Strangers (see photo).

Having seen drama therapy in action in English jails, Harcourt came home and began interviewing Kiwi prisoners who had committed violent crimes, alongside writer William Brandt. The result was solo play Verbatim, which Harcourt performed in prisons, theatres and schools across Aotearoa (plus the Edinburgh Fringe Festival). Harcourt is thankful that the “extraordinary experience” of acting in the play was captured for 1993 documentary Act of Murder, thanks to director Shirley Horrocks. The interviews done for Verbatim and “intense” later show Portraits, all fed into 2003 feature film For Good (see below), which Harcourt helped develop.

Harcourt briefly put acting aside to be interviewed for 1993’s It’s in the Genes Girls. The documentary asked several mother and daughter artists the same question: is art in the genes? The rest of the 90s showed Miranda shared her mother’s work ethic. She played wife to a straying Kevin Smith in TV drama City Life, and was nominated for her work in sci-fi thriller Typhon’s People and Duggan TV movie Death in Paradise; she narrated the animated Hairy Maclary, and cameoed in acclaimed TV series Cover Story and movie Topless Women Talk about their Lives.

Harcourt also featured in docudrama Clare, playing cervical cancer whistleblower Philidda Bunkle. She was part of Maurice Gee ensemble drama Fracture, and later played mother to the main character in two well-regarded telemovies: Jean and Tangiwai – A Love Story (she was nominated for a NZ Television Award for Tangiwai). Onstage, she won rave reviews and a 2009 Chapman Tripp theatre award, for autobiographical show Biography of My Skin.

In 1997 Harcourt made her screen directing debut with short film Voiceover, an experimental documentary inspired by her radio announcer father. Pavement described the film as “fascinating, provocative, yet surprisingly personal”. Voiceover won the award for Best Short Film at the 1998 NZ Film and TV Awards.

That year Harcourt began a seven-year stint teaching acting at Toi Whakaari. Her time at the drama school can be glimpsed in behind the scenes TV series Tough Act, directed by her husband Stuart McKenzie. During this period Harcourt made another short, which she co-directed with fellow acting teacher Rawiri Paratene: 1940s-era tale Needles and Glass was invited to the Montreal Film Festival.

Harcourt is a partner in the company MAP Film Productions, alongside McKenzie and Neil Pardington. She has appeared in short films directed by each, including McKenzie’s darkly comic Ends Meat and Pardington’s The Dig(which was invited to Cannes, as part of a special showcase of New Zealand shorts).

The MAP trio worked together on McKenzie’s debut as a feature film director. For Good follows a young woman (Michelle Langstone) haunted by the actions of a convicted killer (Tim Balme). Harcourt plays the mother of a murder victim. Christchurch Press reviewer Margaret Agnew praised her “superlative” work: “Harcourt’s raw pain and anger is awe-inspiring.” North and South called her “bloody brilliant”. Harcourt talks about the film in this video interview.
In 2017 Harcourt and McKenzie were finally able to realise longtime passion project The Changeover; the couple shared the directing reigns. Adapted from Margaret Mahy’s coming of age novel, it tells of a teenage girl who meets a man with strange powers (played by Brit Timothy Spall). The cast includes Melanie Lynskey and Lucy Lawless. Listener reviewer David Larsen called it “an involving, likeable adaptation of a modern Kiwi classic”.

Harcourt has also made her mark in a very specialist field: as an acting coach for screen actors. Back in 1993 she was given just a few hours to guide newbie Melanie Lynskey on her audition for Heavenly Creatures, and help determine if the teenager was up to a starring role. Fast forward two decades, and Harcourt was becoming a sought after acting coach — sometimes working on-set, sometimes via Skype. Although the job varies widely, often she works with young castmembers, including on locally shot projects The Lovely Bones, Kaitangata Twitch, and Bridge to Terabithia.

In 2015 she was in India for movie Lion, coaching both Hindi-speaking extras and Dev Patel (Slumdog Millionaire), for what would be an Oscar-nominated performance. Two years later, Australian Nicole Kidman made a point of thanking Harcourt while taking an Emmy award for TV series Big Little Lies.

In 2002 Harcourt was made an Officer of the New Zealand Order of Merit, for services to the theatre and the community. She confesses to having passed the “terrible virus” of acting to her daughter Thomasin and son Peter.