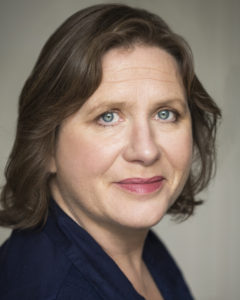 Katherine McRae’s screen career began before she even got to drama school. In 1973 she starred as Kezia in an adaptation of Katherine Mansfield’s classic short story The Doll’s House. It was the last film made by legendary screen couple Rudall and Ramai Hayward, before Rudall ‘s death in May 1974. McRae’s fellow castmembers included her sister Alyson, and mother Elizabeth — who was also making her screen debut.

Shortly after graduating from drama school Toi Whakaari, McRae landed a role in The Marching Girls. The series was a groundbreaker in terms of showcasing contemporary NZ women’s stories; in fact actor/writer Fiona Samuel had created it partly in frustration at the lack of challenging screen roles being offered to females. McRae played Janice, the naive, God-fearing, scooter-riding member of the social marching team.

In 1988 McRae reunited with Marching Girls director Melanie Rodriga to star in feature film Send A Gorilla, alongside Carmel McGlone and Perry Piercy. The film followed three women working at a singing telegram service who must deliver 50 telegrams in one day, despite a litany of personal problems. McRae played an opera singer in training, who is pulled in to help out by a sister suffering from laryngitis.

In 1993 she acted in Gaylene Preston mini-series Bread & Roses. In the same period she took on a brief role on Shortland Street as estranged daughter to receptionist Marj Brasch (played by her real life mother Elizabeth). Three years later she began writing for the high-rating soap. She spent two years as a writer, and returned to the Street in 2006, this time to play Nurse Brenda Holloway. She stayed on Shortland Street until Halloween 2007, when her character fell victim to ‘The Ferndale Strangler’, which she’d been tracking in one of the show’s best remembered plotlines. McRae went on to cameo as Cheryl West’s prison manager in the final series of Outrageous Fortune.

In 2007 McRae began directing for South Pacific Pictures, the production company behind Shortland. She had already directed award-winning stage productions; now she directed episodes of Shortland, Nothing Trivial and on the final season of Go Girls, working full-time as a director for the company until late 2014.

In 2015 McRae wrote and directed short film Abandon Ship, which starred Sophie Hambleton as a mother who, after a hellish day, sets off with her young boys on a mission of discovery around Wellington’s south coast. Shot by veteran cinematographer Alun Bollinger, the film was screened at several international film festivals, including Toronto’s TIFF Kids International Film Festival.

McRae has also provided voiceovers for documentaries (eg Children of Gallipoli) and commercials. She has taught screen acting and directing for a range of organisations including Unitec and The NZ Film and Television School. Along the way she has directed a number of short films involving trainee actors, including The Engagement Party (2016), for Auckland acting school The Actors’ Program.

She plays a murderer in 2017 telemovie Catching the Black Widow.